I’m gonna take a little therapeutic journey, and I’d like to bring you along. Welcome to the strange and treacherous world of Show Reviews.

Most of us, when we think of a (classic, not Yelp) Reviewer, we think of some bespectacled middle-aged man in wool coat and Burberry scarf sitting in the third-row of a big budget Broadway show, scribbling furiously on a pocket-sized note pad. The cast of said show anxiously waits for the morning edition of the newspaper to come out, eager to see their fate. They dive into the reviewer’s verbal dissection of their art, something akin to strapping #11 scalpel blades to a Rototiller, hoping the pile of good words outweighs the pile of bad words. More good words are a kiss of gold. More bad words are a honeywagon* being brought to the backdoor of your theatre and spraying PortaPotty gatherings all over your stage. Now a lot can be learned from an objective review– what is unclear, what does/doesn’t work, what resonated with people. But when you get a Honeywagon Review, and crap gets flung on your show, no matter how hard you work to clean it up, review readers are still gonna assume your show stinks.

For… centuries, audiences have trusted the critical eye of reviewers. They have training in “what art should be” and years of practice analyzing works, yes? Their words can be harsh because they know how to objectively pick a thing apart, yes? They wouldn’t work for this big-name publication if they didn’t know what they were doing, yes?

Well, yes… when print media was still a daily part of life.

Over the past 20 years, we have seen the decline of print publications. Thousands upon thousands of trained and qualified journalists have been laid-off as budgets have been gutted by the presence of online media. (I’m one of those people that rarely read a paper anymore, so I openly admit to being part of the problem.) At a large and well-established publication, this means your categorical specialists are being trimmed back immensely. At the local newspaper level, this means people pulling double-duty. The featured article writer may also be responsible for getting the Police Beat (double-entendre intended) feed readable. The person who takes calls for the want ads may also be the prime reporter for the school district because they have two kids in middle school. And, the paper’s graphics designer might be wrangled to help do show reviews for the big theatre festival. Just like a police department that is understaffed and stressed out because they have to deal with everything from old Mr. Richards busting out of the nursing home and going for a joyride because he still remembers how to hot wire cars, to the Get-Off-My-Property clan that lives on the walled-up ranch thirty miles out-of-town threatening to plant pipe bombs in the Verizon store kiosk at the Pleasant Place Mall (“because of the goddamn 5G… and that Trevor kid that works there on Saturday’s is an asshole”), print publications, with too few trained writers, send folks that have never learned a thing about live performance to play “reviewer” (double-entendre accidentally discovered).

Now, it is not all on the shoulders of the folks pulling double-duty. They were thrust on a task with no guidelines to objectivity or structure to follow.

So, what DO they know about reviewers? They are the people that use a surgical Rototiller and say blunt things about stuff they don’t like, right? It’s like Yelp reviews, right? Like famous actors, they’re supposed to be assholes, right?

Now imagine you’re a hard-scrabble troop of young actors, sinking all of your overtime, minimum wage savings into driving across country to be in a theatre festival you were lucky to get in. Or, you’re a retiree that, after 40 years of working the same sales job to support you and yours, you were finally ready to take a jump back into the theatre you loved so much when you were in high school. Or, you’re a full-time performer, weary of seeing the same structure of show over and over. You wanted to try a new idea, and even if it doesn’t work perfectly, it’s a risk you’re willing to take to evolve to the next idea. Of COURSE you’re gonna go to the Fringe theatre festival. That’s what these festivals are for! And, yeah, your show is not perfect, you know that, but you are proud of it.

Here is where it gets absurd. Welcome to the self-therapy part of this post.

I have a show called “Query the Crone”**. It is difficult to explain, to categorize. It was born from a “potion woman” character I developed for Sterling Renaissance Festival (shout out). I would spend my days as a healer, talking to people about their problems. I would listen, dispense wisdom, and give them a little herbal trinket and a ritual to follow to help their cares. It seems I tapped into my inner pagan a little too well, because the “silly rituals” were affecting people in a positive manner. It was beautiful to see folks so encouraged by something so simple.

I wanted to see if there was any way to create this calm intimacy in a “show”. I updated it to the turn of the 20th century, the “potion woman” being a “conjure woman” in the Appalachian foothills, allowing for a widely-defined mix of folk wisdom, morphed Christianity, relatable modern thought… and cool props. And murder ballads. It would be risky, because 1) I would have to find a way to create what felt like an inclusive environment on a sterile stage, 2) I would have to slowly convince people to buy into the conceit of being part of what is happening, and 3) I would have to figure out how to do it by myself, without anyone to reinforce the conceit. Plus, with the U.S. then-becoming ever-so increasingly divided, I wanted to find a world that unified the extreme Christian Right with the roots (so to speak) of earth worship that is present in all religions in some form or another. Make a calm quiet space, where we all could just Be.

So I OPENLY admit (and definitely learned) it is difficult to lead the audience in to The Crone’s world from a stage. Different spaces had different challenges, and it often took the show or two performances to figure out how best to use the space, particularly if it was in a traditional raked seating theatre lay-out. Plus, for various reasons from my typical procrastination to having my heart dipped in nitrogen and smashed on the floor, AND that festivals knew me from previous-year comedies (Haydell Sisters and SHEnatra), I was NERVOUS AS HELL. So, I’m not here to throw my mining cap to the floor and cry my show was perfect. But….

Donna Kay Yarbrough amazes me. She became a recovering country singer with anger issues for “The Fabulous Haydell Sisters,” she became Frank Sinatra trapped in a female body in Shenatra, and now…..Query the Crone. 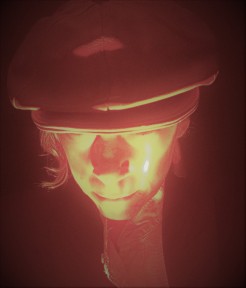 It’s more an interactive performance artist’s installation than the average Rogue show. You sit at the campfire of a 1920’s Appalachian witcher-woman, healer, or conjure-woman named Rosemary Conley. She talks to the people who come to her home, asking about this woman’s family, complimenting that man on being sober. Rosemary cuts, shaves, and crushes plant materials to make her charms and folk remedies, all while telling tales and singing back-country ballads.

The true magic here isn’t the herbal concoctions, it’s seeing the character emerge: the unvarnished face, the intense gaze, the acceptance of fundamentalist religion and white witchery as existing together, superstitious tales of demons and congregations, and the mournful ballad of Lindabelle that resonates through the valley where you have been transported. Fresno gets to be the tryout venue for Query the Crone, and we are lucky to be present at a birth that is not premature, but is full-term and already walking on its own.

From the Star Phoenix, Saskatoon, SK

At the end of her one-woman show, Donna Kay Yarborough promises the performance will be different every time.

That’s probably good news based on the mostly lifeless rendering of her opening night edition.

The Portland, Ore., performer plays a woman who lives in the woods and offers homespun tales and observations while she concocts home remedies.

Yarborough does a decent job of inhabiting the role of the mysterious woman, but the opening-night performance felt unrelentingly dark and occasionally mystifying.

She punctuated the performance with audience interaction where she offered mixtures to address problems like unwanted sexual attention.

She actually applied peppermint oil to an audience member. She held another spectator’s hand for an extended period.

She warned the audience early her performance would not resemble a conventional play: “You think I’m putting on a show here?”

She started with a religious parable and moved into a long — several minutes long — grim song about a dead baby.

She followed that up with a slightly cheerier tale about a tragedy in a coal mine.

Her gems included this, on gossip: “You know how it is with women folk. Their mouths are loose.”

Yarborough addressed the small audience after the show and acknowledged it’s “very experimental.”

“This show is very much an embryo right now,” she added.

At 50 minutes, the show does not go on too long, but here’s a query for the crone: Why don’t you fully develop this embryo before you ask for people’s time and money to see it?

…And there you have it.

This was a really long-winded way to get to my point. That is, take reviews with a grain of salt. Read reviews with the same critical eye that you would use to review a show. Learn to recognize when a reviewer has personal issues with the performer (I know MULTIPLE award-winning performers that got Vendetta reviews and lost thousands of dollars from lack of attendance). Look for a reviewer that strives to find something POSITIVE to say, even in the weakest of shows. And most importantly, talk to “regular” people that have actually seen the show. These can be some of the most valuable perspectives you can hear. And for the artist, they can keep you buoyant in the wake of a bitter and vicious review.

After being a bit of a pariah at the festival of the second reviewer, I received this from an audience member. And it honestly kept me from giving up on a show experiment I love and will continue to nurture.

“Hi Donna. I was one of the fortunate 9 that you invited around your campfire in Saskatoon. You are my favourite Fringe play 2 year in a row. Your talent is amazing. Last year I felt like I had been to a concert and this year you took me travelling to the south. I was totally immersed in your stories. I love my pouch [the herbal token I made for her]. I hope you come back next year, I can’t wait to see where you take me.” -Aug. 13, 2017

That simple message– “I can’t wait to see where you take me.”– keeps me going.

TLDR: Take reviews with a grain of salt, Listen to the opinions of “regular” people, Tell artists you love ’em.

Soooooo…. I’m gonna start a page on my site for audience reviews! Go to the cleverly-named “Audience Reviews” for more details.

*Honeywagon, also known as the “Moneywagon”, is the sewage-sucking truck that you see cleaning up those blue/grey/green portable toilet stalls. Shitty job, rightful compensation. I salute you, Honeywagon workers.

**”Query the Crone” is STILL alive, and will forever be in development, because life doesn’t stop at 45 minutes.